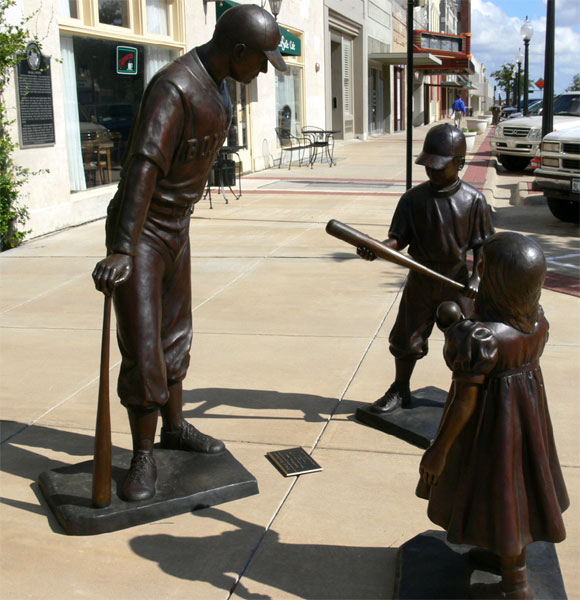 On August 25, 2006, the Brazos Valley Bombers sprung to life at a press conference in the courtyard of the LaSalle Hotel in downtown Bryan. Amidst all the excitement about the area’s only sports franchise, the statue of a Bombers player with two children – which stands on the sidewalk outside the historic hotel – reminded attendees that the Bombers of the future have an historic pedigree.

The original Bombers managed to distinguish themselves, but not in the most desirable manner. The club finished the 1947 season in last place with a 38-101 record, 40-1/2 games out of first place. In fact, the Bombers were 28 games behind the seventh-place Henderson Oilers and their .273 winning percentage was the third-worst among spela säkert the more than 400 major and minor league teams. The only really notable event that season occurred when the July 5 home game was delayed by an unwelcome guest – a snake, which had wandered into right field.

The 1948 Bombers improved to a 66-74 record (.471) and fifth place in the standings. First baseman Stan Goletz, who had appeared in five games for the Chicago White Sox in 1941 before serving in the Army during World War II, became the Bombers first All-Star.

Following the 1948 season, the Lone Star League folded and many of the teams banded together to form the Class-C East Texas League. A new league only saw the Bombers revert to their old ways as the club finished 48-91 (.345), once again in last place. Sadly, the 1949 campaign was the last full season of minor league baseball in Bryan.

The 1950 season opened with a new name for the Bryan franchise – the team was now known as the Sports – but little else had changed. The Sports stumbled out of the gates and found themselves with a 23-65 record in late July. With little more than a month remaining in the campaign, both Bryan and the Paris Panthers folded and bowed out of the league.

It was several years before baseball would return to Bomber Field. In 1953, the Greenville Majors of the Class-B Big State League were performing well on the field, but they struggled at the gate. On June 25, Greenville’s loss became Bryan’s gain when the Majors headed south and relocated to Bryan to finish out the season. Despite the strong start, the squad struggled in its new digs, slipping to a 70-77 record and a sixth place finish.

Sporting a new name, the Bryan Indians embarked on the 1954 season with renewed confidence… little did they know it would be the last Opening Day for professional minor league baseball in Bryan. The Indians sputtered early in the season and never recovered, and by season’s end the team had relocated to Del Rio, where it had conducted spring training. The Brazos Valley’s last pro team finished the year with a combined 53-93 record, good for sixth place in the Big State League.

Though Bomber Field had an eight-year run as the home of professional baseball in the Brazos Valley, Bryan wasn’t the only area city to host a minor league team. Brenham’s love affair with baseball has its roots more than 100 years ago, in 1905, when it briefly served as the home of the relocated Beaumont Millionaires of the Class-C South Texas League. The team spent only a week in Brenham, where it was renamed the Orphans, before finishing the season on the road. Pro ball returned in 1914, when the Brenham Brewers managed a 50-34 record and a third place finish in the Class-D Middle Texas League. The following season, another relocated team gave rise to the Brenham Kaisers, but that too was short-lived. Just eleven days after the Kaisers arrived, the Middle Texas League and its four remaining teams folded, ending Brenham’s run in pro baseball.